Acupuncture 101: What You Need to Know Before Starting Acupuncture

Acupuncture has been a respected integrative therapy in Eastern medicine, dating back to its beginnings in China an estimated 3,000 years ago. Today, tens of millions of treatments are administered yearly in the United States alone. One of the most common conditions acupuncture addresses, which has been proven effective in numerous scientific studies, is pain—particularly in the lower back and neck.

“People also come in for other things, like anxiety, infertility, digestive issues, or IBS, because we say that the needles can help ‘access the organs.’ So, it’s not just having an effect on the muscle where the needle goes into, but it can impact the body on a deeper level,” says Liz Lee, a licensed acupuncturist and traditional East Asian Medicine practitioner at Summit Therapy and Health Services.

Acupuncture needles come in different lengths and gauges, and treatment is designed based on individual patients’ desired outcomes. Unlike getting an injection where one feels a “prick,” an acupuncturist’s technique ensures minimal discomfort. Per Lee, many patients don’t feel anything at all. At most, she says they may experience a heaviness or warmth, but most often the sensation is a general feeling of relaxation.

The practice is based on the ancient concept of chi, which means energy or life force. “We say all living things have this chi, but sometimes it gets stuck or it doesn’t flow very smoothly. Or, there isn’t enough of it. That can cause problems; pain, illness, disease,” explains Lee. “The needles help to facilitate smooth flow of the chi—they help it get unstuck or to flow in the proper direction. For example, stomach chi should go down, but sometimes it goes up and people have reflux. The needles help redirect the chi so it goes down.”

Typically, Lee advises patients come see her over the course of three appointments—even though many report feeling better after just one visit. “Each treatment provides a cumulative effect, so at first you might notice relief for a couple of days, and then it will last longer and longer—depending on what you are coming in for. Everybody is different, so I always say give it at least three tries.”

Each treatment is individualized to the patient’s needs. One patient may require needles to be left in for 40 minutes, while another may benefit from only 20 minutes. “Some people do well with a lot of needles. Others do better with very few needles and prefer really shallow insertion of the needles,” adds Lee.

Potential Side Effects of Acupuncture

Akin to many integrative therapies, acupuncture is accompanied by almost no side effects. Lee shares that the most common effect would be getting a bruise if the needle happens to interact with a blood vessel. “That’s quite rare,” she notes. “The other thing is people become quite relaxed by the end of the treatment, so it’s probably not a good idea to do a big workout or anything strenuous after. You need to try to plan on relaxing and not doing too much with the body. And no alcohol, either.” 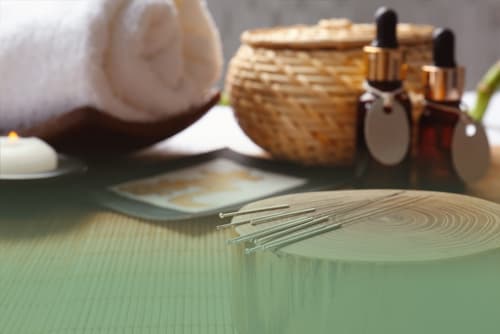