How to stay Healthy and Eat Nutritiously During Pregnancy

From pregnancy cravings to the myth women need to “eat for two,” there are a number of nutritional factors pregnant women need to consider from the point of conception. Dr. Laura Baker, family medicine physician at Pullman Family Medicine, shares what moms-to-be need to know.

How Much Weight Should Women Gain?

Excessive eating can lead to unhealthy weight gain. Per Dr. Baker, women don’t need to increase their caloric intake until the second trimester, at which time the daily increase should only be 340 calories. In the third trimester, that bumps up slightly to an extra 450 calories per day. “It's really like an extra snack, essentially. It's not eating for two, or double the amount of meals,” she states.

Expected weight gain is based off each individual’s initial weight. If a women is underweight when she becomes pregnant, it’s recommended she gain between 28 to 40 pounds. Normal weight at conception allows for a 25 to 35 pound gain. If they're overweight, women should only gain between 15 to 25 pounds, and if they're obese, it should be between 11 to 20 pounds.

“Most of this weight gain will occur in the second to third trimesters. And these recommendations are made to allow adequate nutrition for the baby while not gaining too much weight—that will be hard to get off after the pregnancy,” explains Dr. Baker.

Dangerous Foods to Avoid During Pregnancy

Certain foods should be avoided during pregnancy—even ones that non-pregnant people routinely eat. It’s critical to abstain from foods that might cause some sort of infection. For example, unpasteurized dairy products, raw meats, and even deli meats can be dangerous. Fish that are very high in mercury should also be avoided completely, such as shark, swordfish, king mackerel, marlin, bigeye, tuna, and tilefish.

One that can be really difficult for people is caffeine. “Some sources say you should avoid caffeine altogether, but most others say that if you limit it to less than 200 milligrams per day, that should be safe. That's equivalent to about one 12-ounce cup of coffee,” notes Dr. Baker.

A healthy and balanced diet during pregnancy is not that different from a healthy, balanced diet outside of pregnancy. The recommended amounts of different food groups, based on the increased caloric needs, include:

Hydration is also important; a little over two liters of water is recommended per day. This is especially crucial if women live in a climate that's hot and dry.

“Of course, you want to avoid foods that have excessive calories with low nutritional value, such as soda, desserts, fried foods, high-fat foods, or whole-fat dairy. Lastly, it's very important for every pregnant person to be taking their prenatal vitamins every day, because there are extra nutritional requirements during pregnancy that are covered through this prenatal vitamin,” urges Dr. Baker.

One significant concern many pregnant women have is losing their “baby weight.” One of the best strategies, says Dr. Baker, is to adhere to the recommended weight gain during pregnancy. She also advises safe exercises, which include walking, stationary cycling, aerobic exercises, dancing, resistance exercises, stretching, and water aerobics. However, women should always seek the advice of their doctor before embarking on an exercise regimen.

After the baby is born, breastfeeding can actually have a slight benefit in decreasing weight retention. The recommended length is at least 20 weeks of breastfeeding.

Diet and exercise is key in the postpartum months as well. It's been shown that a healthy diet postpartum plus exercising is better for losing pregnancy weight than either one alone.

“It is safe to diet and exercise in the postpartum period without decreasing milk production, as long as you're consuming at least 1500 calories per day. While it is unclear exactly how quickly the weight should be lost, many experts say it'll take about six to twelve months. So, be kind to body and give yourself the appropriate time to lose the weight,” shares Dr. Baker. 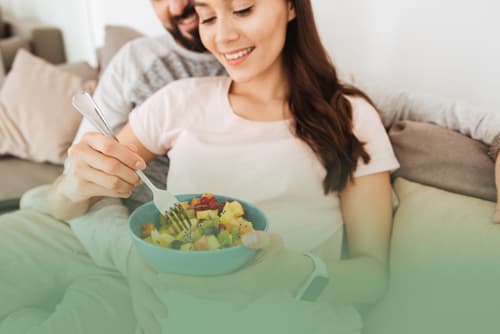