Becoming a new parent is an exciting time. You’ve finally welcomed your bundle of joy into the world and can’t get enough of those coos and newborn snuggles. And yet, this can also be a time of uncertainty for parents—especially those on their first parenting “go-around.”

One key area of safety our BirthPlace emphasizes is infant sleep, particularly in the first year. While the guidelines have changed over time, the current recommendations are that babies sleep safest alone—in their crib, bassinet, or pack-and-play. This is for every sleep, including nap times and at nighttime.

“No pillows, no toys, no blankets. The American Academy of Pediatrics wants you to room-share, but not bed-share. The safest sleep is on their backs, in a crib, in a safe sleep environment,” states Liz Montgomery, Executive Director of Safe Start.

Babies Should Sleep on their Backs

This standard differs from a few decades ago, when experts believed babies should be placed on their stomachs. At that time, it was thought that if they were on their backs and spit up, they would choke. With research and more data, and a better understanding of a baby’s anatomy, the exact opposite was proven.

“The food pipe actually sits below the windpipe. If a baby on its back spits up, it would literally have to go up against gravity into the airways. When your baby is sleeping on its tummy and spits up, it can breathe that spit-up right back into their lungs and aspirate, which has been a major issue and a cause of death in some babies,” cautions Montgomery.

What is a Safe Sleep Environment for Babies?

While it can be tempting to place items such as teddy bears, pillows, or blankets in a crib or bassinet, all of those are hazards. Pillows and toys can be strangulation or suffocation hazards, and blankets can cause overheating.

This rule applies to nap time as well. “Think about how long it would take for a baby to die without oxygen. They need oxygen. Even if you look away for five minutes, a blanket could have gotten over your baby's face. For every sleep, even nap time, they need to be on a flat, firm surface,” adds Montgomery.

Restricted items also include crib bumpers, which pose both suffocation and strangulation hazards. These bumpers were invented because the slats on cribs made decades ago used to be far apart, and babies would get stuck and severely injured—or worse, die. “Instead of adding more slats on the crib, which is what we have now, they invented the crib bumper. But then we ended up with suffocation and strangulation deaths. So, crib bumpers are no-go. We'll take a bump on a head versus suffocation. We can fix a bump on the head,” advises Montgomery.

Bed-sharing (or co-sleeping) has become a common practice in some households. However, over half of deaths every year in the United States occur when an infant is sharing a sleep surface with an adult. The recommendation is for room-sharing, not bed-sharing. “It's really easy to fall asleep in the middle of the night with your baby. Keeping them right there near your bed is the best option,” shares Montgomery.

Another common misconception involves inclined sleep. Research has proven sleeping at an angle does not help with a baby’s reflux—and it actually poses significant danger. With inclined sleep, the baby’s head falls forward. The chin then rests on their chest, which can pinch off their airways. Again, babies should always be placed on a flat, firm surface.

For current recommendations and further advice, parents and caregivers can turn to the American Academy of Pediatrics (AAP), Centers for Disease Control (CDC), and the National Institute of Health’s “Safe to Sleep” campaign. Seeking out information from these trusted sources doesn’t mean you’re an uninformed or “bad” parent. Encountering conflicting information online or among friends is a common occurrence—and can put your baby at risk.

“We find that a lot of families, or even caregivers, they just don't know. They're not up-to-date or they've read something incorrect on the internet or Facebook. These are top-notch sources. The best of the best,” assures Montgomery. “They have the best medically evidence-based information that we have here in the United States. And they all three agree on the safe sleep recommendations.” 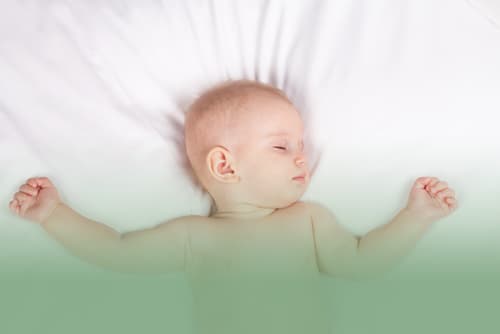