With multiple deaths and hundreds of cases of a mysterious lung disease, many people have questions about and are concerned with vaping—especially because an increasing number of teens have adopted this growing trend. 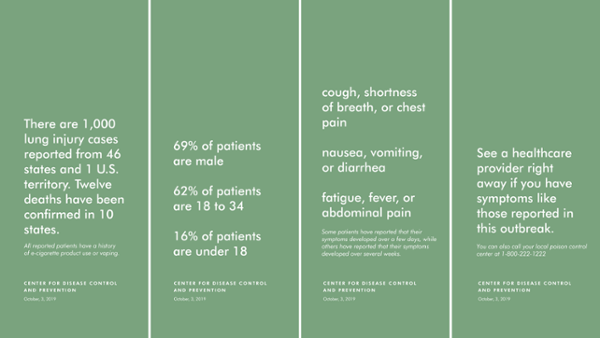 The major concern right now is the dangerous lung illness that has impacted over 1,000 Americans—of which the cause is still unknown. The concern initiated in Wisconsin where several reports were made to the Wisconsin Department of Health, but it has since spread to almost every state. “Some scientists believe there’s something in the liquid, and when it aerosolizes and gets into the lungs, it turns back to liquid. This is harmful to the lungs and may be the cause of these terrible illnesses in folks that have used the vaping devices,” shares Dr. Mikkelsen.

Some common symptoms of vaping illness include:

If you are having any of these symptoms and believe it’s associated with vaping, you should see a healthcare professional as soon as possible.

Impacts of Vaping on the Youth Population

The vaping trend is increasingly popular among younger generations—and proves to be ramping up even more, rapidly. In 2017, among surveyed high school seniors in the United States, 27 percent admitted to vaping nicotine in the previous year. In just one year, that jumped to 37 percent of high school seniors. “Unfortunately, these are new nicotine exposures. These aren’t people who used to smoke cigarettes and are switching to vaping. They are starting with vaping,” warns Dr. Mikkelsen.

While many cities and states have banned flavored vape liquids, they are not necessarily the culprit in the acute lung injury cases. Where they do find blame, says Dr. Mikkelsen, is the appeal of these flavors in the young adult population. “Flavoring is what is used to market to youth, and that’s the real concern.” Another troubling factor is that despite the ban, vaping products are still available “on the street.” These products may be even more dangerous than the ones sold in stores.

The Unknown Future of Vaping

Because studies on vaping are relatively new, in comparison to traditional cigarette smoking, the long-term effects are not yet known. But again, Dr. Mikkelsen maintains vaping should not be used as an alternative to cigarette use.

“Many public health experts feel that the long-term effects of vaping are less damaging than cigarette smoking because of all of the horrible chemicals in cigarette smoke. But, it turns out there are plenty of horrible chemicals in vape as well. And, it’s not controlled as well in the United States as, say, Great Britain. I think there will be more control coming down the line. But in the end, we just don’t know exactly what’s in e-cigarettes or the vaping liquid that so many adults and youth are using,” says Dr. Mikkelsen. 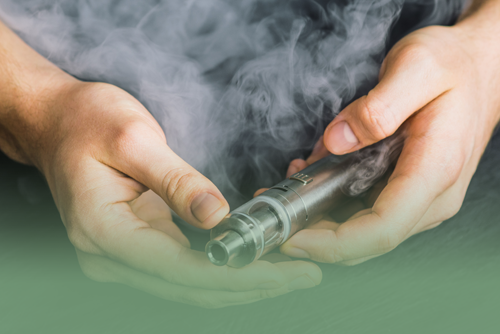