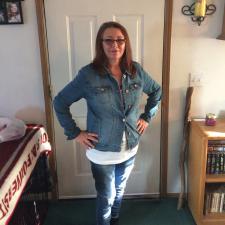 Wellness for Life saved my life

A year ago this March, Bev was thankful to be at the hospital’s new employee orientation ready to start a new job in the Red Sage Café.  She had made the decision to leave her former job that she found stressful and was looking forward to working at PRH, which she had heard was a great place to work. After getting her blood taken as part of the orientation process and Wellness for Life program, our Lab ran the usual blood panel which included a glucose reading. “The gal from the lab came in to orientation upstairs in the Skills Lab and pulled me out,” Bev said.

That’s because Bev’s glucose level registered at a dangerously high level of 354! For someone without diabetes, a fasting blood sugar upon waking should be under 100 mg. That was the wake-up call Bev needed to accept that she was diabetic. “I had symptoms for years but I was in denial,” she said. She had not been seeing a doctor on a regular basis because she was uninsured. However, she was experiencing all the signs of diabetes including dizziness, sweating, frequent urination, and being thirsty all the time.

Before being diagnosed, Bev explains that even her dog knew she wasn’t doing well. “He was waking me up every night with his nose,” she said. “I think he knew I was going to fall into a diabetic coma.”

At just 5 feet, Beverly is a petite woman. When she was diagnosed, she tipped the scales at about 200 pounds. “I looked so bloated and I used to keep junk food in the drawer of my desk and just eat it throughout the day,” she said.

After a period of feeling sorry for herself, she said, she’s turned her life around and lost 70 pounds in one year. “I did it for my four grandkids and for myself,” she said. “I don’t want to die and I don’t want to take insulin.” She was on insulin for about five months but was able to stop when her blood sugar levels dropped down to normal range.  Now her doctor, Stephanie Fosback, calls her the “Poster Child for Diabetes” and how to control it through diet and exercise.

“I cried and cried when I was officially diagnosed,” she said. “Then my husband said, ‘Now you know. What are you going to do about it?'” What did she do?  She keeps moving. “I don’t sit down. I push the (food) carts down the hallway to patients quickly.”  She parks far away when she goes to the store. She walks her dog every day – briskly.  She’s eliminated sugar from her diet for the most part and eats a lot of chicken, fish and vegetables.  She stays away from pasta, bread, corn, peas, and white potatoes. “I treat myself to sweet potatoes though.”

She checks her blood levels every day. “It’s a commitment but diabetes can be controlled through diet, exercise, frame of mind, and support.”

She is happy to help anyone who is struggling with their weight or diabetes. “If I can help somebody else to look at themselves and make healthy changes, I will be so happy. I know that the support of Dr. Fosback and my husband has helped so much.”

But she is quick to point out the two things she says saved her life. “Thanks to my dog, and my job at Pullman Regional Hospital, I’m here today.”