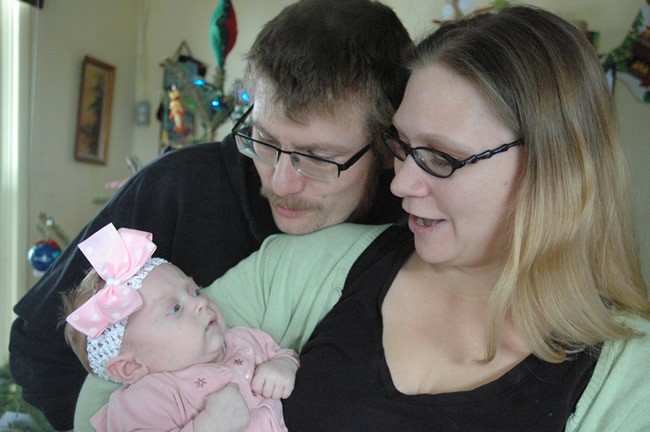 By the time the baby crowned, Danielle and Joseph Whitecotton, of Elk River, were approaching mile post 18 on State Highway 8 – still about 25 miles away from the delivery suite at Pullman Regional Hospital.

“She was sitting normally in the seat and then she says, 'Oh, my God' and does this number,” said Joseph, demonstrating how his wife suddenly splayed forward in the passenger seat. “I said, you need to hold on until I get around this corner. And then we stopped just past a concrete barrier.”

Cordelia was Danielle's eighth child. And there was no reason to think the baby was going to arrive early, let alone quickly.

“I've had four at Pullman Regional Hospital,” Danielle said. “Usually my water will break and contractions won't start. So we have plenty of time to get to the hospital and hang out awhile.”

Having experienced Pullman Regional's BirthPlace hospitality and professionalism three prior times, Danielle said she was looking forward to being in a suite for the labor, delivery and post-partum stay. “I told my doctor I love the nurses and I love their breakfast omelets.”

But there she was, biding time in the front seat of the family station wagon.

“Most of the time,” Joseph said, “we're waiting around at the hospital for eight to 10 hours.”

At around 10 p.m, while Joseph was at a friend's bachelor party, Danielle said she felt a “twinge.” Then another, and another.

“They were fairly regular, but they weren't painful at all. So I figured maybe it will turn into something, maybe it won't.”

Danielle's doctor, Nigel Campbell of Moscow-Pullman OB/GYN, was born and raised in Pullman and graduated from Pullman High School in 1996. So he knows that Elk River rests in the remote reaches of Idaho's Clearwater County and that State Highway 8 twists its way for more than 60 miles between the two towns.

“It's infrequent,” Dr. Campbell said of roadside deliveries, “but it happens.” He complimented the Whitecottons on what appeared to be expert handling of Cordelia's expedited introduction into the world.

Looking back, however, Joseph admitted that things happened so fast as he sped down the highway that he wasn't sure just what his wife and second daughter had in mind. “The contractions were getting closer and closer together. She had one between Deary and the gun club outside of town, and I'm going, oh, no!”

In addition to Cordelia, Joseph and Danielle are parents to Claire, Chuck, Caleb, Calvin, Connor, Corbin, and Catcher. Joseph explained the count this way – “I was raised in foster care and Danielle was an only child. We wanted a big family.”

The night Cordelia decided to arrive started peacefully. Danielle's mother was visiting. They were watching television when that first twinge came. “And then from ten to eleven o'clock, I was having very mild contractions. I thought, I wish my water would just break, because then I would know and we could head to the hospital.”

At 11 p.m., Danielle got her wish. “The water broke and the next contraction after that was really painful.” Then another painful contraction. She called Joseph. He left the party immediately and was home within 10 minutes. Danielle's mother stayed with her seven grandchildren while Danielle and Joseph gathered their things, got in the car and sped off.

“I didn't start panicking,” Joseph said, “because I had this watch, and I'm, okay, tell me when the contraction is over.” They started to come quicker and more intensely. Joseph flipped on the flashers and stepped on the accelerator.

“Between Elk River and Bovill,” recalled Danielle, “he's saying, 'I'd go faster, but I don't want to hit a deer or a cow or something.' There are black cows on the road around here at night.”

Once the two reached Bovill, “I was gone,” Joseph said. The car approached 85 miles per hour. “I was hoping I'd attract a police officer,” said Joseph, who works as a chaplain at the state prison in Orofino. But the highway was virtually void of traffic. The Whitecottons slowed down only through Helmer, then Deary and then regained speed as the contractions came harder. Suddenly, Danielle said, she could feel the baby coming.

“At the only concrete barrier on Highway 8, at mile post 18, she began to go 'Ohoooo,'” Joseph said, “and I said, you're going to have to wait until I get past the barrier. And then I pulled over right after the barrier.”

As Joseph slammed the car in park, Danielle turned toward her door. Joseph raced around through the headlights while taking his shirt off.

“I ran and caught the baby in the shirt.”

“It was literally like when he got there, her head was out,” Danielle said. “One more push and she was out.”

Cordelia cried once, started breathing and seemed content with her new world, Danielle said. “I just held her.”

“I panicked the whole time,” Joseph said, “and kept asking, is she breathing, is she breathing?” With the umbilical cord still connected to the placenta inside, the Whitecottons drove nearer the speed limit through Troy, Moscow and finally to the hospital in Pullman. Joseph said he walked calmly in the door, up to the desk and asked the attendant, “How's your night going?”

“All right,” the man answered.

“Well,” Joseph said, “we just delivered our baby in the car. My wife is out there with her right now.”

Hospital personnel swarmed to the emergency area, Danielle recalled. “They're like, 'Oh my gosh, she's beautiful. And she was born in the car?” Daughter, mom and dad were quickly admitted.

“They put her under a heat lamp because she was a little cold,” Danielle recalled, “and we hadn't been in the room more than five minutes and Dr. Campbell was there. He came in, delivered the placenta, looked her over and said she was great.”

“This kiddo might have been just perfectly positioned,” Dr. Campbell speculated, “to come cruising right down and out.”

And yes, Danielle confirmed, it seems that regardless of where deliveries actually happen, the breakfast omelets at Pullman Regional Hospital's BirthPlace continue to be “delicious.”