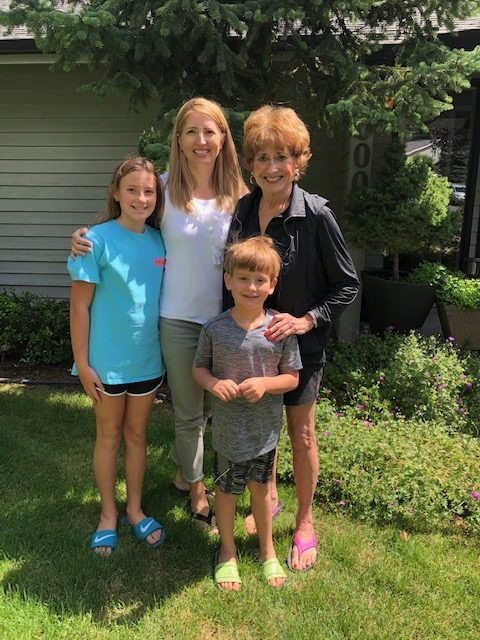 It’s a long way from Paris but for patient Joanne Anderson, Pullman, she’d much rather receive care from her home town hospital.  While visiting Paris on a group tour, Joanne fell on steep stone steps and hurt her hip.  She ended up in a hospital in Paris for surgery to recover until she was discharged and flew back to the U.S. with her daughter.

“It was a 16 hour flight back to Calgary, BC and then a flight to Seattle and drive to Pullman,” she said.  “My hip was hurting bad.”

Perhaps it was the long-travel or time in the hospital in Paris but Joanne ended up with an infection in her hip.  Upon arriving in Pullman, she had surgery performed by Dr. Ed Tingstad and the infection was cleaned out. She then spent days at Pullman Regional Hospital recovering while on antibiotic therapy.

Pullman Regional Hospital is a special place for Joanne since she was a key part of the interior design when it was built in the early 2000s.  She is now retired from the business she built in Pullman called Design Effects but she still has an eye for details and what makes a healing environment.

“I remember us choosing the color of these walls – Asian Jute – very deliberately because it takes on different shades depending on the lighting,” she reflects.  “It’s really like an upscale hotel here with a medical component attached.”

“Part of the care you receive is physical but the other part is emotional healing,” she said about the nursing staff and physicians.

“I told him ‘Go,’” Joanne jokes.  “It is confirmation of what a family man he is. It also attests to the same care he gives his patients.”

Joanne speaks highly of the communication between patient, doctor and professional staff.

“They work as a team and it’s a seamless transition,” she said.

She’s happy to be home now and going to Summit Therapy for regular follow up physical therapy.

“I don’t feel like I could have gotten better care anywhere else,” Joanne said. “The hospital staff cares about you.  They want you to get well.”