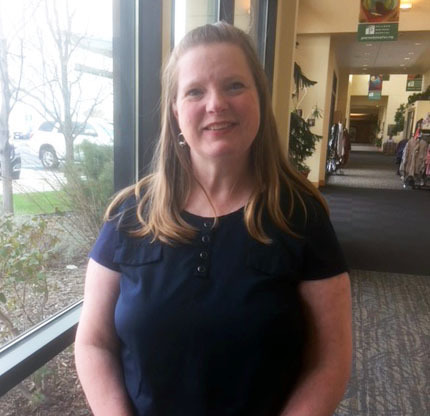 February 22, 2018 was a normal day for Melissa Allbee, Colfax resident. She was working at her job as a program coordinator at the WSU Student Recreation Center on campus. She was talking with a co-worker when he noticed her speech was slurring.

“He said, ‘Melissa, I think you are having a stroke.’"

Her co-worker and WSU students, who work at the Rec Center, took immediate action. They called 911 and paramedics were quickly there to transport her to Pullman Regional Hospital.

“From the time he recognized I was having a stroke to when I was in the hospital Emergency Room it was 15 minutes,” Melissa recalls although she was in and out of consciousness during the episode.

Melissa was given TPa (Tissue Plasminogen Activator), a clot dissolving drug that improves blood flow to the part of the brain being deprived of blood flow. It is important TPa be given within a certain time frame after experiencing a stroke to be effective.

“I was responsive within minutes,” Melissa said. “Pullman Regional Hospital saved my life.”

Melissa was flown by Life Flight to Sacred Heart Medical Center for further treatment and stayed there for several days.

“The scan showed that it was an ischemic stroke. It was actually my second stroke but they couldn’t tell me when I had the first,” she said.

“The Emergency Department staff was kind, not condescending.  They cared about my comfort and health,” she said.

Melissa, who was 48 at the time of this second stroke, does have a family history of stroke. She now has an insertable cardiac monitor that detects if she is having any kind of irregular heartbeat that could lead to her “throwing a clot.” She does have some residual effects including short term memory and word recall issues.

This medical emergency has made Melissa grateful and appreciative of people and her family. The mother of two grown daughters, she said, “Because of Pullman Regional Hospital, my children came home to visit me; not to bury me.”