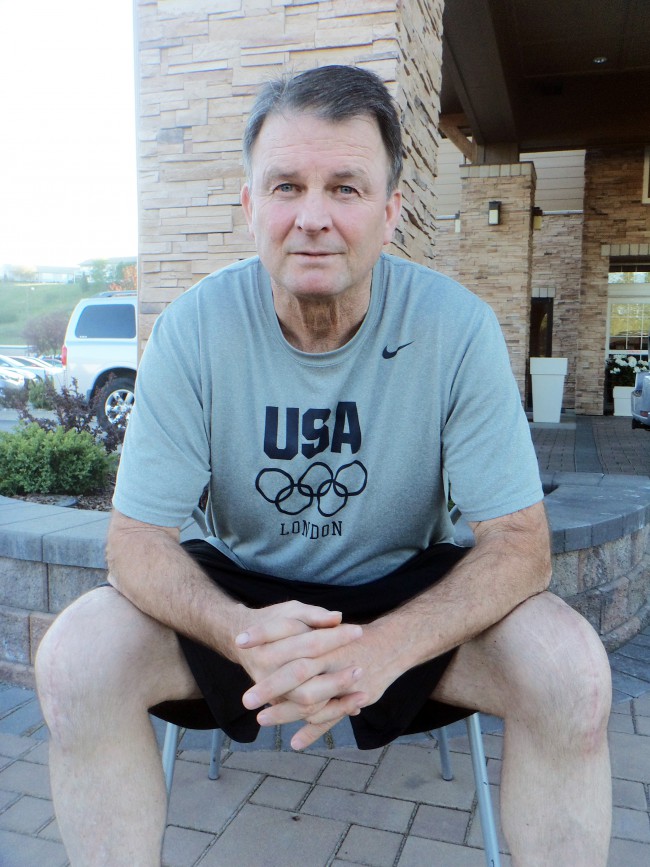 Mike Levenseller has new knees. He used to have old football knees – bowed out, scarred and screwed together after seven surgeries on the left and one on the right.

The bad knees were the product of a football career that saw Mike play four years at Washington State University, three years in the National Football League and two more in the Canadian Football League.

“On the last game of the year,” he said, recalling his days with Calgary as a wide receiver and the first injury, “I made a plant in the end zone, and it just ripped loose. It took the bone. The ligament didn't tear, but it took a piece of the bone out.” More injuries and surgeries followed.

Mike's 9th and 10th surgeries, bilateral replacements of both knees, were done recently at Pullman Regional Hospital by physician Ed M. Tingstad – a venue-surgeon combination of Inland Orthopaedics Surgery, Mike said, he considers second to none.

“I've had surgery in Calgary and Tampa Bay and Tacoma, and a lot of different places. And I've never seen anything like this (at Pullman Regional), how comfortable it was and how good they are with the patients.”

At 57, Mike looks back on a football career that included one year each with Buffalo, Tampa Bay and Cincinnati in the NFL and stints with Calgary, Edmonton, British Columbia and coaching in Toronto of the CFL. But he is best known locally for the four years he played as a wide receiver and the 20 years he coached at WSU. He most recently coached at the University of Idaho.

“I'm not going to chase the football,” Mike said about the possibility of coming out of retirement to coach again. Right now, he said, he's determined to rehabilitate his knees and enjoy a pain-free future. “You can tell I'm bubbling about the care I got.”

For the better part of 20 years, Mike said he increasingly suffered from his deteriorating knees.

“I had to wait until my knee would unlock,” he said about a simple movement like getting out of bed in the morning or exiting a car after driving. “I'd just lean into it, put pressure on it and it would get into place and I could walk away.”

The left knee was worse than the right. He was 28 years old when first injured.

“I didn't get touched. I had in and out coverage and I was trying to beat the inside guy, make him cut outside and get underneath him. And I just felt the knee go.” Mike recalled television crews zeroing in on him as he writhed in pain and issued a few expletives on air. “My mother was watching. So I called later, and rather than worry about my knee she said, 'Hey, you can't say that kind of stuff on TV.’”

After his first surgery, Mike returned as a player-coach and, in retrospect, concedes that he returned to the field too early. “That week I caught 15 balls and set the team (Calgary Stampeders) record for receptions in a single game.” But the knee got worse and the surgeries began to mount.

When he came back to WSU “out of loyalty” to coach, Mike said he spent the next two decades mentoring wide receivers and became familiar with Pullman Regional Hospital as a place where injured players were afforded uncompromising care and attention.

“I've had a lot of student-athletes who've had surgery there.”

But Mike admitted that he balked at his own surgery needs. His knees got worse, to the point where friends who see him today are dumbfounded. “People laughed at me, I was so bow-legged. Now they're shocked because I'm straight.”

He credited Dr. Tingstad for not only doctoring him and his family members over the years, but for recognizing a stubborn man leading up to the bilateral knee replacements.

“I think he knew ornery and old well enough that he said, 'You'll tell me when.'”

That time came over the holiday season, when Mike made an appointment, met with Dr. Tingstad and the surgery was scheduled. He remembers going to the hospital and preparing for the operations, but nothing else until he woke with new knees and doctor's orders to get moving.

“The day of the surgery, you've got to move,” he said. “I was on a walker, but you've got to move. The big thing is blood clots. And they make you move. But I enjoyed that. The next day I went quite a bit farther. And it wasn't long before I was taking laps around the hospital many times a day.”

The hospital staff acted a bit like football coaches, but much nicer, Mike quipped.

“The hospital. Every nurse was great. And then you have your CNAs, I thought they were all nurses too, because they were so good.”

Even though his future mobility weighed in the balance, Mike said he never considered going elsewhere for the surgery.

“Dr. Tingstad gave me the opportunity. He said, 'I'll take you up to Spokane and there's another doctor up there, if you're not comfortable here. And I said, are you nuts?”

His bowed and brittle knees straight and strong again, Mike said he's regained his 6-foot-one-inch stature and, for the first time in 20 years, can walk up stairs one foot in front of the other. He's able to get out of cars and bed with ease and, while some “snap, crackle and pop” can be heard when he moves, the pain is all but gone.

“Dr. Tingstad told me that for three months I wouldn't like him, and then after that I'd love him. And it didn't take that long.”

While he's been advised to never run or jump again, Mike said he's taking longer and longer walks and plans to get back on exercise machines and a bicycle soon. In the meantime, he's mowing the lawn and wrestling a rototiller.