What You Should Know About Headaches and Migraines

According to the World Health Organization (WHO), almost half of the adult population has experienced a headache at least once in the last year. The 2013 Global Burden of Disease Study reported that migraines are the sixth highest cause of years lost to disability, while headache disorders in general are third.

“Headaches or pain anywhere in the head are among the most common neurological symptoms and reasons for consultation in neurology practice,” says Dr. Sarita Said-Said, Neurologist and Neuromuscular Medicine Specialist with Palouse Neurology,  a regional partnership between Pullman Regional Hospital and Gritman Medical Center.

How to Classify Headaches

Although medical science doesn’t fully understand what causes most headaches, it is well known that structures exist in the head that can signal pain, such as blood vessels in the head and neck, tissues surrounding the brain, and nerves originating from it. But, the brain itself and the skull are not responsible for the pain.

“There are over 300 types of headaches,” states Dr. Said-Said. “We classify them in mainly two groups, primary and secondary types of headaches.” Primary headaches are benign, not caused by any underlying disease or structural abnormality. These include migraines.

Secondary headaches are new headaches that occur along with a disorder or disease. This can include underlying causes like an infection, head injuries, bleeds, or tumors, etc.

While migraines are very severe, not all severe headaches are migraines. Migraines are two to three times more common in women than in men.

When to See a Doctor for Headaches

There are a few well-known red flags that indicate when you should seek medical attention.

The management of headaches is holistic. The first step is to try to isolate a cause, and if there is one, treat it. “Also, it’s important to determine if there are triggers that can reproduce the headache. In this case, we recommend avoiding such triggers,” advises Dr. Said-Said.

For instance, in the case of migraines, certain things such as bright lights, smells, sounds, and certain foods are known triggers. Avoiding these triggers can minimize the occurrence or intensity of the migraines.

“Another point I like to address with my patients is lifestyle changes. One of them is stress. Stress is a very well-known trigger for all types of headaches, including migraines. Meditation and relaxation techniques can be very useful,” shares Dr. Said-Said.

Other treatments and preventative measures include physical activity, good posture, adequate hydration, frequent snacking, and avoiding fasting. Weight management is also very important. Some supplements have been found to be very helpful in preventing migraine attacks, including magnesium citrate, vitamin B2 (also known as riboflavin), and coenzyme Q10.

The most common headaches Dr. Said-Said sees in practice are tension headaches and migraines. “These are usually treated with acetaminophen or NSAIDs, (nonsteroidal anti-inflammatory drugs), suh as ibuprofen, naproxen, which can be found over the counter,” she notes. “We also use anti-nausea medications, sometimes along with an NSAID or acetaminophen.” These are to be used only as needed, but avoiding chronic usage as they can have severe side effects. Prescription medications can be helpful in certain cases to prevent headaches from occurring as frequently or as severely in the long term.

“Of course, the best way to determine which medication is best for anybody is to consult with their physician. There is a long list of treatments that can be tailored based on the side effect profile and also coexisting medical conditions,” concludes Dr. Said-Said. 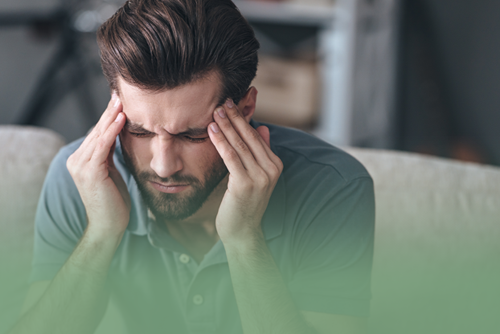